International Architectural Competition for the New Museum of Underwater Archeology in Piraus, Greece.
archiplus architects & associates with Michael Athanassiadis, architect
The Ark of Time
For nearly a century the SILO building stands out as an emblematical reference point in Piraeus’ port.
The basic principle of this study’s approach is to equitably address two main objects: the industrial building and the port surroundings, as a palimpsest where the distinct functions of the new Museum and Cultural Park are rewritten. There is no way this intervention would abolish the references to the historical character of the intervention.
Outside and inside the building, the history of the complex is rewritten through a process of Transparent Layering and Dialogue established between functional and morphological data. A method that illustrates the archaeological process itself, while it literally allows for new and alternating perspectives, experiences and thus, interpretations.
Choice of materials and forms is part of an architectural language, aspiring to operate on collective memory and to indicate change of power, without betraying the historical character of the area and its original morphology.
New shells/masks surround the building complex in order to serve new functional requirements(adding necessary new facilities, energy support) and to let the historic building “emerge” from the new Museum shell.
Following this concept, the access level to the Museum “hovers” over the port level, and separates the port operations from those of the entire cultural park. But still, it remains a key bonding and morphological element, and it allows for visual and operational switch of the inner relationship between Museum and port operations.
This is the element that reshapes the relationship with the waterfront, and uses architectural organizing to activate 24-hour opportunities for different ages and interests to co- exist and to be entertained.
A green space for shading and recreation that enables users to uninhibitedly approach Museums and thus, to significantly contribute to their obvious integration into everyday life.
The proposed architectural interventions use the same language as the “SILO” and “port” to chat with them, but in a different dialect. The oxidized steel casing converses with the concrete of the historic building; the wood of the eternal surrounding promenade converses with the sea; the strict geometry of the main building converses with the playful public space.
The building connection between the introvert Museum and the Public Space is assumed by the “tentacle” of a belt that hosts functions on the verge of the building program(auditorium, educational programs, diving tank, cafeteria).
What applies to the outside, also applies to the inside.
The SILO (the first exhibition element of the Museum) with its constant presence, accompanies the visitor throughout his route into the exhibition.
Interventions in the inside reveal and exploit the size of the building, according to eventually formed museum requirements. These interventions operate as a framework of an applicable architectural grid of spaces, different size levels, characters, and inner relationships. 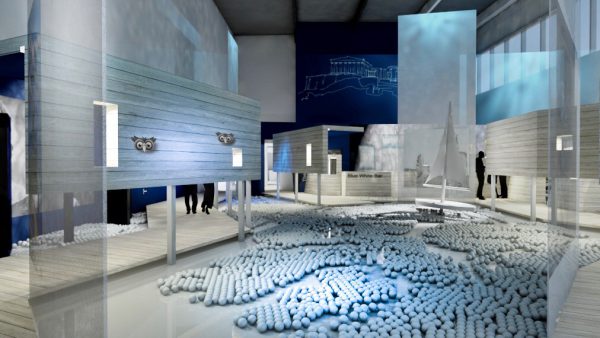 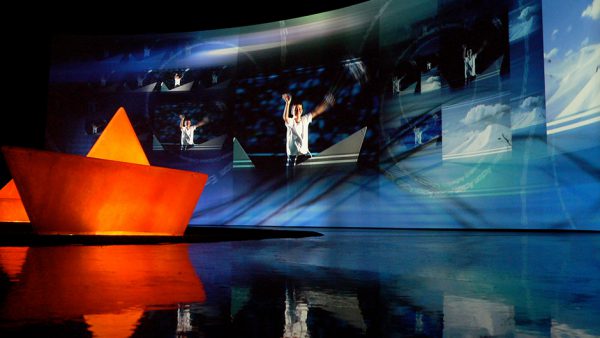